It’s only as I crawl feebly towards the final hours of this stinker of a year that I realise I distanced myself from this blog every bit as effectively as I did so many other parts of my life.

In fact, I got up to a few things in 2020, in spite of (first) Spain’s fairly strict lockdown measures in the middle of March and (second and ever since) my own voluntary, near-total continuing efforts to self-isolate. With only the company of my better half for direct contact in the last ten months, we’ve still been fortunate that neither of our families have been critically impacted by Covid-19, and if the price to pay for that is only seeing friends and loved ones via screens, we’ll accept small blessings.

But my purpose here isn’t to lament 2020, really. Instead, I’d like to share the handful of positives that (in my creative persona) I’ve had the pleasure of experiencing over the last twelve months. 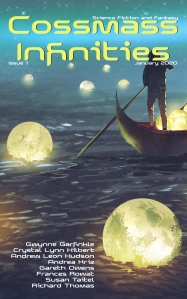 Quick reminder first: as my last post described, twelve sorry months ago, I started 2020 in fine spirits due to the publication of the first issue of Cossmass Infinities, a scifi/fantasy magazine published out of Scotland, which featured my first “pro-paying” fiction sale, Second Chances, Seconds, Chance. They’re now three issues to the good, and long may they persist! It’s no easy thing keeping a zine going, as I can attest – but I’m getting ahead of myself, we’ll get back to that.

Since then, I’m delighted and astonished in equal measure to be able to say that in 2020 I went on to make two additional “pro” sales, one of which was published back at the end of October: Choose Your Battleground appeared in the Canadian eco-fic zine Little Blue Marble and was, unusually for me, not a speculative piece at all, just a plane old common-or-garden militant ecological call to arms (not really).

In addition to these, I also sold another pro story to the soon-to-appear Dark Matter Magazine, which releases its first issue early in the new year. My story, Recycle of Violence, will feature in the third issue which comes out early in the summer – I’m particularly proud of this piece, so safe to say I’ll try to remember to mention when it’s available!

And now to my other bit of news:

After a considerable period of awkward internet-based wrangling, I was finally able to take the reins as editor of Mythaxis, the understated scifi and fantasy zine originally created by my sadly departed friend Gil Williamson. With behind the scenes help from a small technical and reading team, we gave the site a stylistic overhaul and put out three issues in 2020, and are moving to a quarterly schedule in 2021.

My last ever story for the zine appears in our tribute issue to Gil, from now on I’m just going to be editing, but since then we’ve featured some great stories by authors from the UK, US, Canada, Senegal, Germany and India, and our plans for 2021 include parallel fiction projects to accompany the issues to come. I’ll share more details about that in the imminent future.

Told you I wouldn’t keep you long – hope you have a better year than the last one!

In many ways, 2019 was a terrible year — the state of the climate and the state of the politics to name but two — but, I happily confess, on a personal level last year was a pretty good one for me. Let me count the ways:

That’s right, real-life changes of circumstance! But I mostly talk about my writing life here, and I had a few moments of note in that context too:

Not bad, I think you’ll agree! But there’s something I’ve left off that list, something which, although it technically happened in 2019, has only today come to pass.

Obviously I’m pleased about that generally, but this story also represents my first “professional” fiction sale. For those not in the know, there are various magazines and other markets out there for short scifi, fantasy and horror fiction which are catagorised as “pro”, “semi-pro”, or otherwise according to the rates they pay to contributors. One milestone passed: next stop, the bestseller lists!

To celebrate, magazine editor Paul Campbell has given me permission to run a little competition, winners receiving a copy of Issue One in either EPUB or MOBI format. To take part, all you have to do is send me a cool sentence that includes the word “infinite” (or infinity/infinities), the more interesting the better! You can post your entry as a reply here, or to Facebook or Twitter, the first five get a copy.

It’s a nice feeling to kick off a new year with a new achievement. I happen to know that I’ll be returning with news of a second such thing before too much more time has passed, but I’ll try not to get ahead of myself just yet…

Instead, let me wish you the very best of all things for 2020, and whatever ills befall us, be it individually or as a species, don’t let them drag you down!

Almost exactly six years ago, I quit my day job to make a go of it as a professional writer. I hoped that my savings would keep me afloat long enough for me to get a toe-hold and start supporting myself through what I wanted to do. Unsurprisingly, that didn’t happen, and I wound up day jobbing again four years later (and four years poorer, too).

Looking back, this wasn’t a regretful experience by any means — but neither is it one I’d casually recommend, or even recommend at all. I had both plenty of free time and my most productive period ever, but output alone doesn’t lead to income, and the increasing sense of money being an issue wasn’t fun. I wrote a novel that was published by a small US press, but it didn’t sell much before the publishers closed their doors (due to financial miscalculations, as it happens), leaving my work in a rights limbo it didn’t really seem worthwhile rescuing it from. I still haven’t.

There was a sweet spot in there where I was working well and enjoying life, but the problems that inevitably arose from not being materially successful meant that, come the end, returning writing to the status of optimistic hobby and myself to regular employment was almost a relief, if a disappointing one. Two years later, I’m basically living hand-to-mouth, doing a job that just about pays enough (well, not really) while allowing me enough time to chase the writing dream. 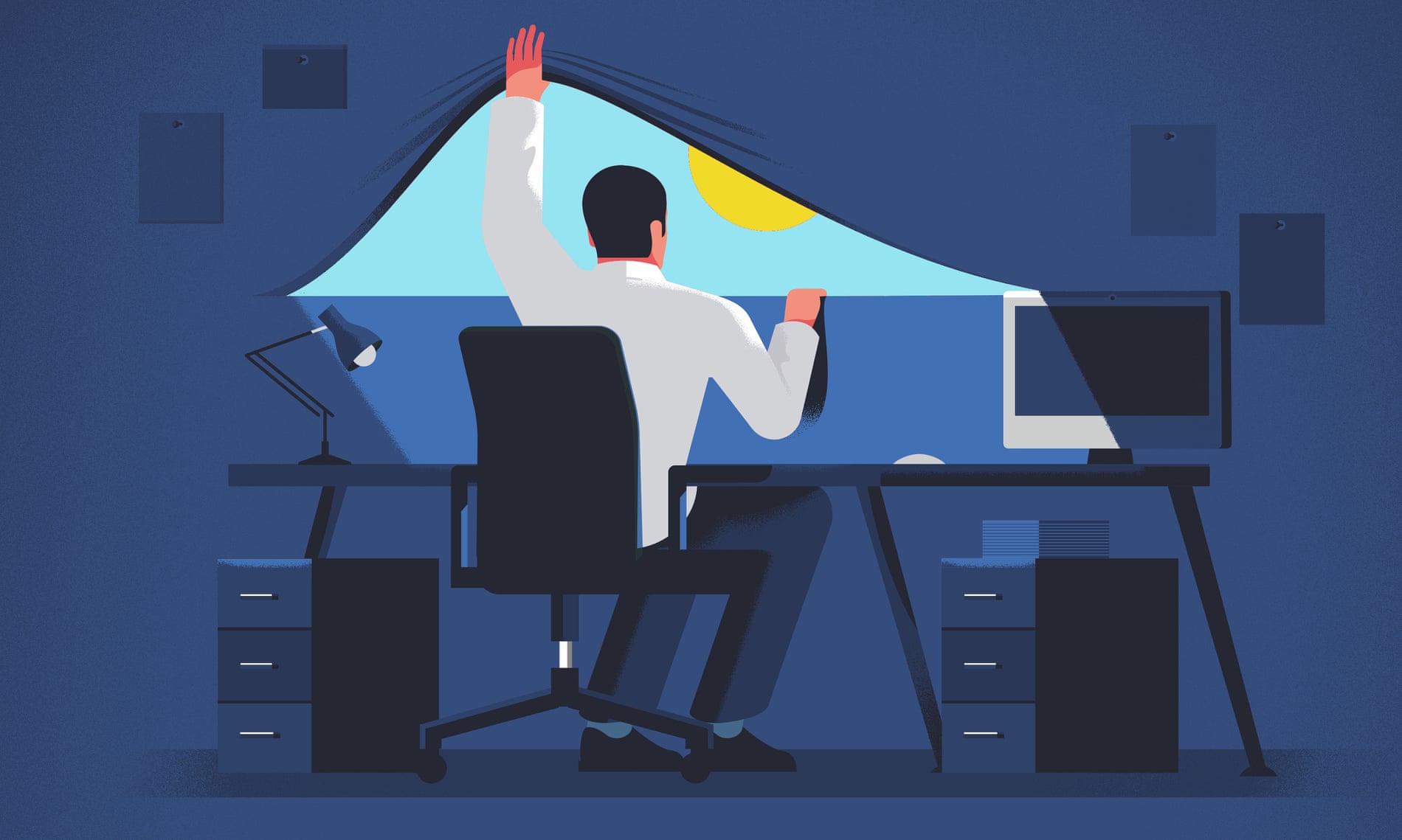 ANYWAY. Today, I found myself reading Andy Beckett’s long-form article in The Guardian, Post-work: the radical idea of a world without jobs, and I was struck by a point made about how workers reported struggling to make rewarding use of their free time. In the late 70s, a famous experiment that I’d never heard of gave magical electronic devices called “pagers” to roughly eighty workers across various strata of employment, which over the space of a week frequently but randomly interrogated them about their activities and feelings at the time of contact:

The experiment found that people reported “many more positive feelings at work than in leisure”. At work, they were regularly in a state the psychologists called “flow” – “enjoying the moment” by using their knowledge and abilities to the full, while also “learning new skills and increasing self-esteem”. Away from work, “flow” rarely occurred. The employees mainly chose “to watch TV, try to sleep, [and] in general vegetate, even though they [did] not enjoy doing these things”. US workers, the psychologists concluded, had an “inability to organise [their] psychic energy in unstructured free time”.

They quizzed a fairly tiny sample size over a fairly microscopic period of time, so, pinch of salt. Yet my experience of working independence echoed this, to an extent. My first year was basically wasted, at least in terms of creative productivity. Away from the structure that a typical working lifestyle imposed, I wasn’t good at managing myself and my activities. However, I improved: my second year was six times better. Flow. So when I look at that quote, what I think is, “If you give those workers more opportunity to learn how to enjoy independent activities, maybe they will.”

It took me a long time to figure out how to be effective, but once I did, life was great. My output increased and, because I was spending so much time writing, my quality of output did too. The problem, of course, was that I couldn’t manage to create a self-sustaining situation out of what I was doing, and that took its toll. I certainly gained from the overall experience, but by the time I packed it in my productivity had dropped back to the level of that first rough year all over again.

For reasons such as this, the idea of a post-work society (or interim systems like a universal basic income) appeal to me quite strongly. Not because I dream of lying around doing nothing much –that’s often called a holiday, and most people agree that there comes a time when you’re ready for your holidays to end — but because there’s something I’ve become pretty good at doing and I’d like to be able to devote more time to it than I can. The fact this sounds almost criminally selfish even to me shows just how ingrained the “moral” norm of conventional work is, I guess.

One of that article’s well-informed quotees notes that journalists, academics, artists and the like are more easily drawn to the idea of a world without conventional work because their lifestyles would demand much less adaptation than everyone else’s would. Fair point, and there are other issues about UBI that make it sound like nothing but prohibitively expensive wishful thinking.

But there’s a weird imbalance in the assumptions we’re making as a society, especially when many of today’s employment options offer little to no rewards beyond the capacity to maintain a shelter for the things you need, sometimes not even that. Is there no responsibility on the part of employers to help satisfy the other needs of people who spend years of their lives contributing to their project? Is the only possible functioning society one where the majority of jobs have to feel like work, and our interests must be hobbies, if we find time to even conceive of them at all?

Or is that just culturally expensive limited thinking?