Once a week since around April 2012, I’ve been going along to a very stimulating writers’ group, the name of which you might be able to guess. The format of our sessions is flexible, but a typical evening will involve ten minutes of free-writing from a prompt followed by similarly practical exercises geared towards exploring some particular creative technique – or maybe just more provocations to write.

Club members take it in turns to lead the sessions, and occasionally – alongside the usual fun – we get to do something a bit different. As, for example, when comic book artist Lance Tooks (originally of NYC and now a confirmed Madrileño to boot) brought along three images from his extensive back-catalogue and challenged us to write whatever they inspired in us, for ten minutes apiece.

Now, I’m not saying I didn’t tidy the text up a bit between the cup and the lip, but it should give you an idea of the kind of activity and output we enjoy on Tuesday nights in the Spanish capital. Of course, I could have picked any of our sessions (and any of our talented and attractive members) to make an example of. Except, you know… pictures.

As you’ll maybe see, ten minutes of fevered scribbling in a bar does not necessarily result in a nice, tidy, finished story. But, as you can certainly see, we had some nice sources of inspiration. 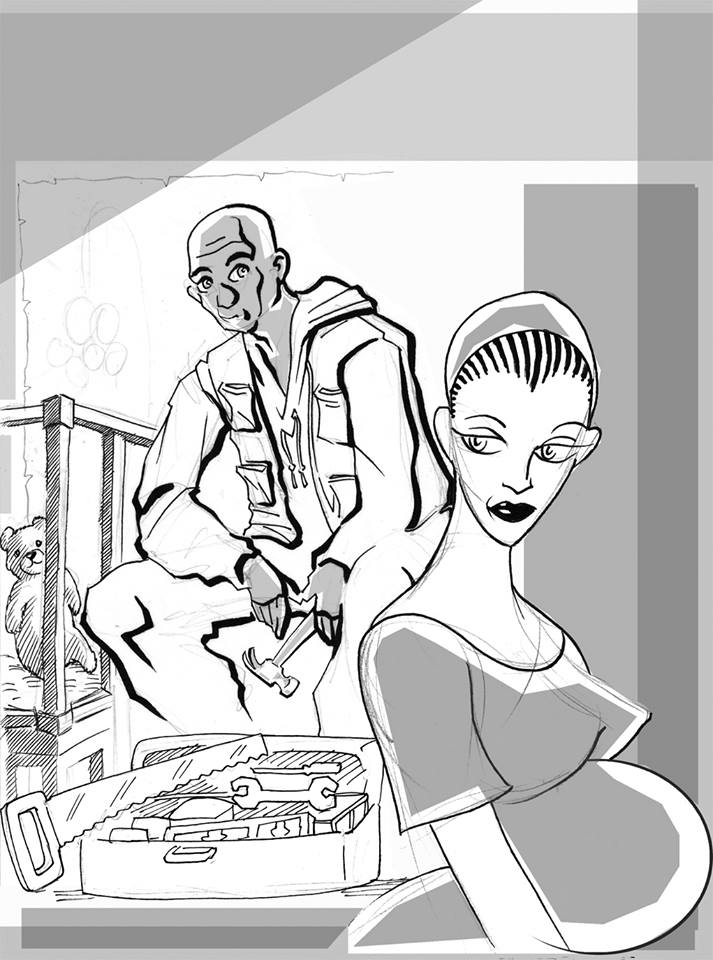 The kids dress up in the clothes they find and pretend the house is theirs, that they are married too.

He imagines the tracksuit fits, that he is tall and lean and long-armed, strong-legged. He does some job that needs tools, like building a new bridge across the river that separates their neighbourhood from this one, where the rooms are wide and the ceilings are high and babies have toys that are new and sleep in their own beds, not their brother’s.

She wears the summer dress like a ball-gown, its hem hiding her old sneakers. She hugs a pillow to her beneath it and suddenly breasts and belly bulge out before her, a baby to sleep in the empty cot while she smiles down on it, the way her mom does with her little sister, back turned to all the rest of them.

The boy pulls the huge hoodie over his head and vanishes like a monk into its deep shadow. He brandishes the hammer, then starts hitting the bars of the cot, paint chips flying. The girl pulls the teddy bear between the bars, then she takes the pillow out from under the dress and holds it down over the blank, button-eyed face.

I love westerns, but whenever I try writing one I immediately bite off more than I can chew by trying to emulate Cormac McCarthy. Still, if you’re going to doodle you might as well play Picasso. I tried to keep the unpunctuated run-on sentences under control. 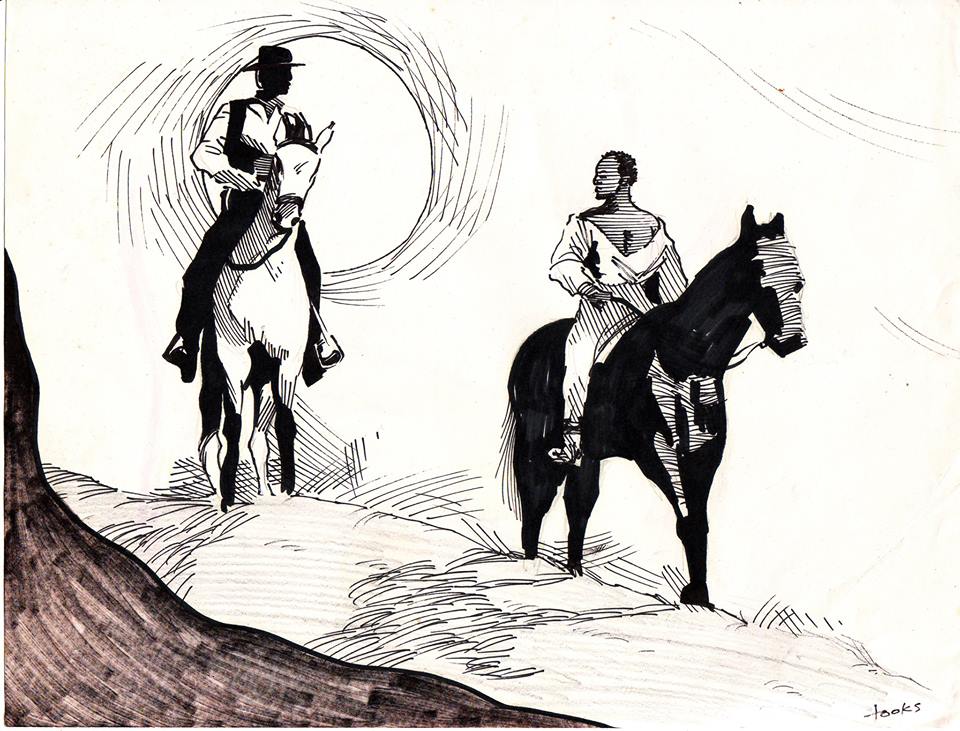 The black man and the negro had been riding for too many days, too many nights.

From time to time, the negro would turn in the saddle, not even sure why he did so. Each time, the black man still appeared as a silhouette against the sun, featureless, not even the glint of his eyes to confirm that his gaze was upon him, always upon him, never blinking, never shifting.

Weary with fear though he was, the negro was grateful that he had still never seen the black man’s face. At dawn, the sun rose behind him. At dusk, it set behind him. At noon, it burned so fierce from above that the negro couldn’t muster the strength to turn. And in the cold night the world was utterly dark, the black man visible only where he obscured the stretch of stars behind him. There was no moon. And they continued riding through the dark.

Then, on the last day, the negro found himself riding into the sunrise, its light first soft on his face, then flat and hard.

For the final prompt, Lance gave us an extra five minutes – like I said, generous – but with one condition: whatever we wrote had to build towards a line of dialogue. Well, I have no problem with speech bubbles at all, but I did take a slight liberty with where this one pointed.

Chita looked out from beneath the shelter of the fake palm leaf awning of the beach front bar. The sea was rolling in, great dark swells. Rolls of distortion behind a haze of graininess, like she used to see on the cheap, second-hand TV her mother had taken as payment one summer when Chita was eight. Rain was the graininess now.

It wasn’t like a beach you’d see on TV, of course. The palms were battered, leaves dangling like they were about to break and fall. The sand was saturated; she could see each rain drop burst a tiny crater at the edge of the bar’s circle of illumination, a moment before new craters overlapped the old. There was a constant hiss of rain on sea, crackling against the big, broad leaves of the real palms and the plastic pretend ones over her head, protecting the empty bar.

It wasn’t even a TV storm. No screaming wind to dramatically stir the world, blow the trees, whip her hair crazily around or transform the waves with wild foam and spray. The waves just rolled with impossible weight, a moving negative in the grey dark. But from somewhere, out there with the distortion, the roll, the static hiss, she heard a voice.

“Help,” said the voice. A tiny whisper she could hardly make out, like a character on a program half-lost in the chaos.

And that’s your lot.

13 thoughts on “The Madrid Writers’ Club”