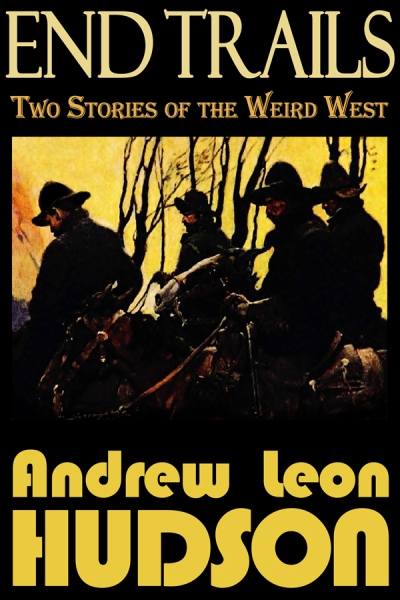 My first effort at self-publishing, End Trails – Two Stories of the Weird West, is now available from both good and evil online retailers.

Travel the end trails – paths that lead into dark places, taking you toward the unknown and from which return is far from certain. Tales of things not believed in from the comfort and safety of civilisation, only whispered of on the fringes of exploration, all waiting in the wilderness.

In Thirteen Bullets, an uncommon sort of preacher is dragged into a frontier town with a bounty on his head, there to face judgement for merely telling the truth – or what may be the truth – but a harsher law is about to be laid down on the townsfolk: Survival of the Fittest.

In The Lying Room, a troublemaker lies dead, killed in a fair fight, or so the killer claims. Yet some injustices are too great to be bound by death, and even when there’s no love lost between brothers one might still rise to defend the other… or himself.

End Trails – Two Stories of the Weird West: tales to read around the camp-fire, to unsettle the mind before you settle down to sleep…