In my last post here, I “revealed” the cover art for my coming-soon weird western ebook, End Trails. Now I’m doing that over, because I’ve had to make some changes to it the last few days. 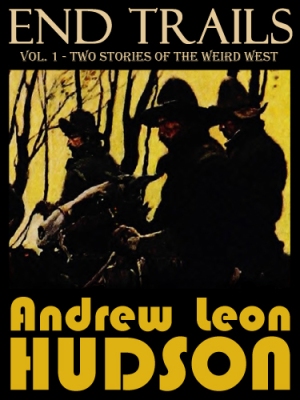 Here’s the original again, for your comparison. It would have looked spectacular on my old Kindle, and matched the shape of its screen, but new ebook readers are a bit taller than mine (and have about a million more pixels) so my first version would have shrunk down to the size of a postage stamp on anything more cutting edge!

There were things I didn’t want to change, like the original three horsemen in the image, but the source art (a scan from an early 1900s magazine – you can see it here on the outstanding Internet Archive Book Images collection on Flickr) wasn’t all that high-rez in the first place, and expanding this little section made it look like it was built out of lego. Anyway, let’s get to the new version, shall we? 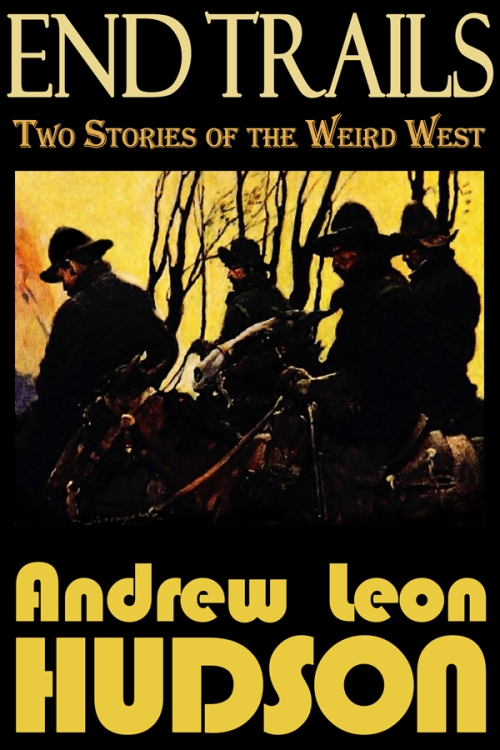 The cover art guidelines on Smashwords aren’t so much guidelines as cast in stone, starting with it being a giant canvas by comparison to my first attempt. The tall-thin ratio, coupled with having to embiggen all the text so it was still readable, meant fitting my preferred typeface at the bottom became a bit of a squeeze.

There’s also a fourth horseman now (lets call him “death” shall we?) which I didn’t really want, but by using a larger swathe of the original the picture isn’t quite as blocky as it would have been, even though I still had to blow it up a little. The eagle-eyed amongst you will notice that he’s wearing a fancy new hat on my cover. That’s because I didn’t want to mislead anyone as to the percentage of Sherlock Holmes material in the book (none, in case the highly litigious estate of Conan-Doyle happen to wander past).

If you click that image, you’ll be transported across to my other blog where you can read another atmospheric excerpt to whet your appetite – but if you simply can’t wait then be aware that pre-ordering is now possible on both Amazon and Smashwords.

And one final shill before the new year is in: if you sign up to my mailing list, there’ll be a belated Xmas treat in it for you come the release date of January 5th, 2015.